Posted on March 6, 2011 by throughstones

It was very good to walk in the woods with people knowledgeable about trees, plants and wildlife. To have one’s attention drawn to points of interest, and to learn a little of the natural history of this particular wood, and indeed the history of human involvement with it too. It was a perspective I don’t normally take when out in the landscape – I tend to focus more upon my embodied experience, opening the senses, breathing, relaxing, responding, imagining… my particular way, as an artist, of relating to my environment.

I was with a Devon Wildlife Trust working party in Uppacott Wood – a small mixed wood, on a hill near Barnstaple, surrounded by farmland. Yes, I have mentioned Uppacott Wood before in this blog. But I am beginning to fall in love with it, so thought I would just mention it again. 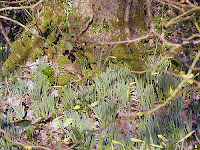 I had been expecting to be spending the day on some clearing or pruning activity – but instead, found myself walking in this magical place with Paul, Joyce and Alison. (All places are magical, of course. It is just a matter of tuning in). The sun was shining, small birds were flitting busily between the trees, and in a corner of the wood a mass of daffodils was just beginning to come into bloom. Whether they were wild or planted by humans, we didn’t know, and it didn’t matter.

I walked clutching a small map, enjoying the water, stones, roots and squelchy mud underfoot, trying to memorise where we were and what I was seeing, as Paul and Joyce talked about what was before us, drawing our attention to twigs and bark, plants and birds, as well as old tracks and embankments made by humans. 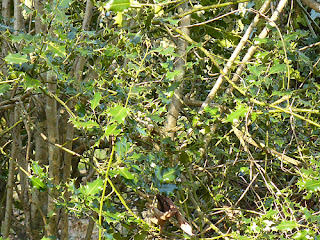 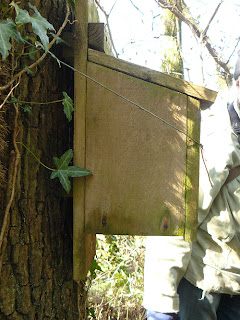 We looked at fungi and typical woodland plants, noting where they grew. We peered into dormouse and bird boxes to find signs of former habitation: droppings, heaped up old dead leaves… and one acorn just beginning to sprout.

As we walked, Paul pointed out trackways and old hedge banks, giving a good idea of how the wood might have been used in centuries gone by: partitioned into small sections for the use of individual small farmers. The wood was crucial to survival in an infinite variety of ways – the timber would have been used for building homes, hurdles, fencing, and of course firewood. Running right through the wood was a wide track, obviously once used for moving cattle. At one end the track opened out into what appeared to be a cattle holding place. When I say ‘obviously’, I guess what I mean is that things become obvious once they have been drawn to one’s attention. 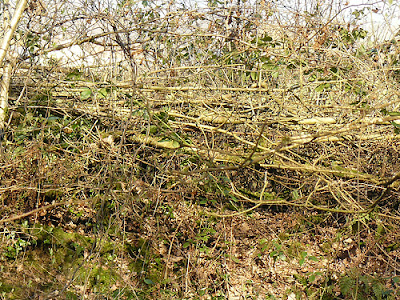 What had until now been a confusing tangle of paths, ditches and banks slowly began to make sense. I stuffed the map in my pocket and began to read the landscape coherently – piecing together little bits of information and building a picture of life gone by.

For sure, the picture might have existed solely in my own mind, but it was vivid and felt real, producing a realisation that we – along with birds, animals, insects, trees, plants and fungi – are but the latest temporary settlers and users of this piece of land.

Later on, after lunch, we cut back branches overhanging a neighbouring field – playing our part in the never-ending story. 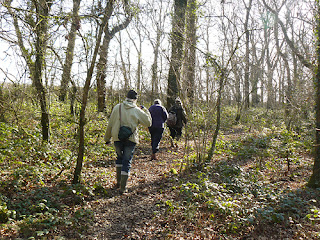 I am primarily a visual artist, living on the North Devon coast, a beautiful semi-rural area in South West England. I am interested in full engagement with 'place' and the eternal movement of life - particularly as it relates to what we call 'the natural environment'.
View all posts by throughstones →
This entry was posted in ecology, ESSENTIAL NATURE art walks, Walking and tagged Devon Wildlife Trust, Uppacott Wood. Bookmark the permalink.
%d bloggers like this: