Posted on January 1, 2016 by throughstones

As a member of AiNIN (Artists in Nature International), I was invited to create a site-specific piece on 29th November 2015, the eve of COP21 (the Paris Climate Conference) in support of the conference’s aims.  Artists around the world were to carry out a synchronised ‘art action’ at 12pm, each in their own time zone.

The project as a whole was registered with ArtCOP21, a global festival of cultural activity on climate change. For full details, please see AiNIN’s special site.

Turning Point is a meandering, spiraling piece is made mostly with fallen twigs and branches, and circling around the trees of Bucks Valley Woods, near my home in South West England.

The idea was for visitors to walk slowly around the tracks – gradually tuning in to the land and the immediate surroundings, in close proximity with the trees, the scents, the sounds, the cool air, the feel of rough bark and wet moss on the cheek… a way of bypassing the thinking mind, and coming into direct physical experience of our inextricable connection with nature.

The slow contemplative walking might be an opportunity to consider the issue of climate change, and the part we might individually be playing in this. Or our relationship with trees, and why they are so vital towards nourishing the land and the air that sustain our lives. Or the effect of climate change on the ever-declining numbers of trees in our country – and what we can each do about all this.

I like this sort of quiet simple activity, a means of coming into harmony with the natural world around us. I like my own slow, repetitive labour-intensive making-process of gathering and arranging materials from the ground. I think it is not possible to make positive changes in the world without first coming into a position of clarity oneself.

Once finished, I began to think ahead, about the synchronised event on 29th..

Fri 27 Nov – Rain made the steep track leading up to the site extremely wet and muddy.

Sat 28 Nov – Storms. Rain and gale-force winds. I knew that driving would be hazardous; and as the ground was so wet, trees were likely to come down in the woods. Also, the track up to the site would be very slippery with mud and running water. People contacted me, saying they did not want to risk coming along to the woods tomorrow.
And so, reluctantly I cancelled the 12pm Art Action.

Sun Nov 29 – I didn’t venture out of the house in the fierce storms that continued all day.
Throughout the following week, the road down to the woods was closed because the river had burst a hole in the tarmac. I  did not attempt to reach my work, to inspect it for damage.

Mon 7 Dec – At last, I got to look at the work. The bluebell stalks were scattered everywhere – but the main part, made with twigs, was not too bad – surprisingly intact, in fact. 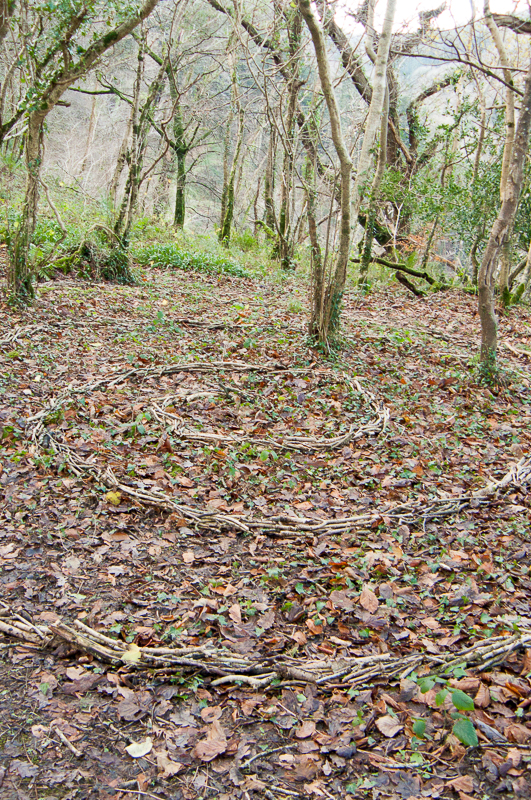 Tuesday and Wednesday –  I spent some time restoring and repairing the work – binding it here and there with ivy, and spiking it with tiny sticks – hoping that would stop it from blowing away.
Wednesday afternoon was sunny and sparkly, and I was happy. I started to take photos, only to find that I had brought the wrong camera batteries…. Drat!

Thur 10 Dec – I had agreed to meet people from BBC Bristol, who wanted to talk to me in relation to a rurally-based TV programme, and also to view Turning Point in situ.

This was the second time I had arranged for people to experience the work, and been prevented by bad weather. It is tempting to assume it was all related to climate change, and the theme of this piece – though some of us British folk might tend to call it Sod’s law.

Sat 12 Dec –  Delegates at COP21 reached agreement today. I have always regarded this conference as a turning point for humanity towards a new way of being in the world. I still do so, though this does not mean we will have an easy ride.

Since foul weather had twice prevented visitors from coming up to my site, what I did was make a bunch of ‘selfies’, to give scale and focus to the underlying concept. The weather was dark cloudy and windy, but no rain! 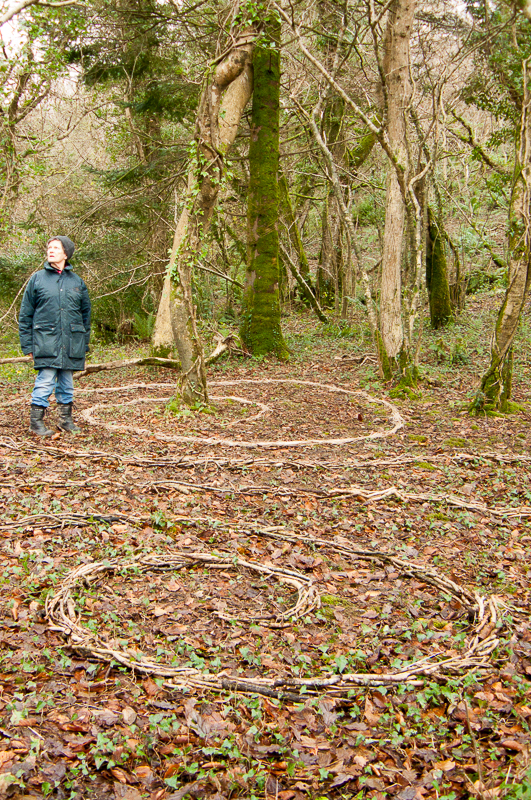 I noticed it was strangely still and silent where I stood under the trees. Gazing up to the sky through intricate interlaced branches, and out towards Bucks Valley and the ocean beyond, it felt like a great open protective dome against the elements.

I stood at the centre of my work, switched my little stills camera on to video mode and span around until I felt giddy: spinning between Earth and Sky.

I am primarily a visual artist, living on the North Devon coast, a beautiful semi-rural area in South West England. I am interested in full engagement with 'place' and the eternal movement of life - particularly as it relates to what we call 'the natural environment'.
View all posts by throughstones →
This entry was posted in climate change, Devon, Environmental Art, nature, North Devon, trees and woodland and tagged AiNIN, art walking, ArtCOP21, Bucks Valley Woods, climate change, contemplation, COP21, land art, spiral, sticks, storms, trees and woodland, twigs and branches, weather. Bookmark the permalink.