Essential Nature Walk along the Taw estuary at Fremington Quay

Posted on September 13, 2016 by throughstones

A quiet and peaceful morning walking in congenial company.

It is hard to believe that just a generation or two back,  Fremington Quay was the busiest port between Bristol and Land’s End, largely importing coal and exporting ball clay. Not to mention the clay works and the  famous pottery that was exported around the world. With the presence of the railway running along what is now the Tarka Trail, and also lime-burning kilns and an abattoir, this must have been a far from ideal place to live.

Today, despite endlessly-encroaching modern developments, there is an air of peace and tranquillity. The area is a haven for wildlife and  for those who come seeking a breathing space, away from the noise and stress of everyday life. 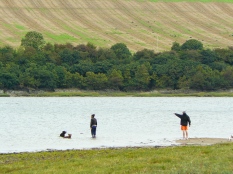 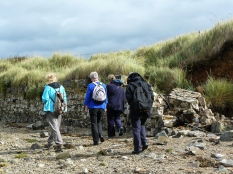 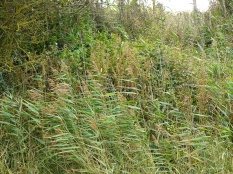 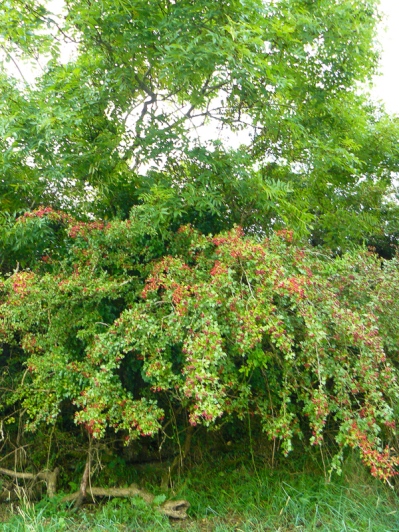 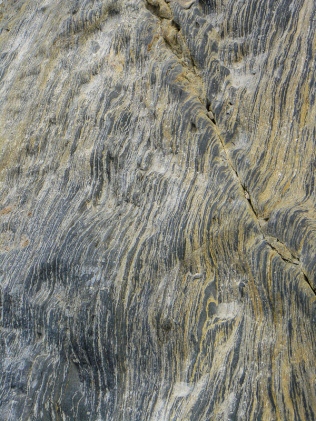 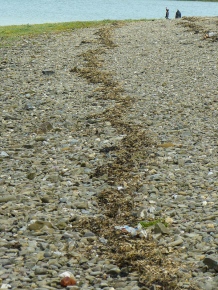 There were a number of choices of route for our walk. We decided against exploring the Gaia Trust’s Home Farm Marsh Nature Reserve  because of long wet grass and lots of mud at this time of year – plus access to the beach was limited because of high tide. We also decided we didn’t want to run the gauntlet of dog walkers and cyclists by following the Tarka Trail to the RSPB Bird Reserve at Isley Marsh a little way further along.

Instead we headed in the opposite direction, along the beach towards Barnstaple to Penhill Point, then round towards Barnstaple’s ‘New Bridge’, that we could see in the distance. It was such a beautiful mild early autumn day – with the River Taw running by our side, the gentle green Devon fields stretching all around us and the wide expanse of sky up above… feeling safe.

It was, what I suppose could be called ‘slow walking’, by which I don’t mean shuffling along in a semi-comatose state – but gradually relaxing and becoming more and more observant and attentive to the details of life all around – the skeleton of an old abandoned boat,  the crumbling, ruined stone lime kiln, the wild plants and trees, and soft sandstone boulders with rough edges worn smooth, softened by aeons of time and tide. Over time, the river had gradually eroded grooves in these boulders, leaving a residue of silt and river mud running over the surfaces in streams – large three-dimensional mud drawings created by the forces of nature.

I think we were all inspired to further creative activity – each in our own way. 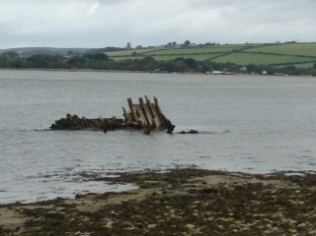 The two pictures above are by Fiona Gibbon.

The ones higher up are taken from my own particular perspective as a sculptor/ land artist. I could have spent the whole day playing around with the natural materials we found lying around: driftwood, pebbles of all colours ground small by a thousand tides, grasses, seaweed, leaves, clay and stone. But I tucked my observations away in my head, and I shall come back!

Please contact me if you would like to know more about Essential Nature and our monthly walks. You can use the Comment box, or reach me via the usual social media sites or my own website (www.lindagordon.org.uk).