This post is also Part 2 of my Balance of Nature Page. If you would like to read both parts, you will find the Page along the top menu. Although various British woodlands are mentioned here, I took all the photos in the Woodland Trust’s Buck’s Valley Woods, North Devon.

Arboreal, (Little Toller Books; edited by Adrian Cooper) was published last year, and emphasises the relationship between woodland and ourselves, the human species – more from a human point of view rather than that of the trees.

It is an anthology of writings from woodlands around Britain, by around 40 distinguished writers, artists, foresters, ecologists, thinkers and teachers, and gives some fascinating insights into their knowledge, wisdom and experience.  For myself, it gave me a warm sense of closeness, with both the authors and with the places they described.

Despite the alienating effects of contemporary life, for many of us, beneath the surface our relationship with trees is still felt to be part of who we are. Adrian Cooper writes in his introduction, how imagination and familiarity are two powerful tools that counter estrangement, allowing the trees to “… become entangled in our memories, taking root in our language” (p13). The writings in this book are clear evidence of this.

On first flicking through Arboreal, I was struck by the variety of personal expression – each contribution as individual and unique as the person who wrote it.

I keep it by my bedside, to dip into as the mood takes me; but here, I have picked out just three samples that happen to reflect my mood of the moment. There are many other superb essays – a kaleidoscope of words – each one colouring the next.

Philip Hoare writes of the New Forest, which he has known since childhood. He tells us how forests have long held a place in our imaginations as being dark and scary, and haunted by witches, wolves and brigands. This reputation has filtered down through the centuries in folklore and tales such as those of the Brothers Grimm.

However, although in 19th century, the New Forest inspired a rather sinister novel by Richard Jefferies– today, the Forest appears to be largely given over to leisure pursuits, and it is difficult to imagine it as in any way threatening.

From a different perspective, Philip Hoare cites Richard Mabey, who noted how in our modern capitalist society, we tend to view trees as commodities, rather than celebrate them for their own sake. The whole of life utilises its environment for sustenance, but Mabey’s observation gives me the uneasy feeling we are appropriating natural resources without due consideration for other life forms or the balance of nature, let alone the long-term implications. (And for sure trees are not the only example of this).

Robin Walter writes how over the centuries trees have always been subject to the will of their successive owners. But there is a difference between managing a wood responsibly, with respect for nature, and managing it predominantly for reasons of profit and self-interest.

Writing from Kingsettle Wood, Dorset, the author gives a fascinating account of our interventions over the years, and of his work as a forester today. On marking trees for thinning, he describes how he weighs up carefully which ones to choose for felling – always with an eye to the future; always taking into account changing conditions, and balancing up our requirement for timber with the urgent need to conserve what is left of our ancient woodland. 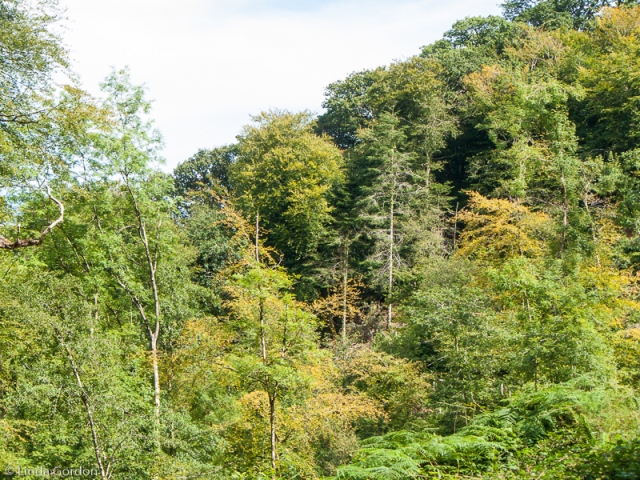 Tobias Jones speaks of Nature Deficit Disorder: a recently coined label for a wide range of psychological symptoms perceived to be the result of alienation from the natural world. Reconnection with nature is beneficial, though many, including the author would say that it is trees in particular that soothe and heal the troubled mind. It is as though the size and longevity of trees, and their slow calm existence radiate a sense of stability and strength that can ease our insecurities. And the pure beauty of woodland life in all its phases must surely lift all our spirits. 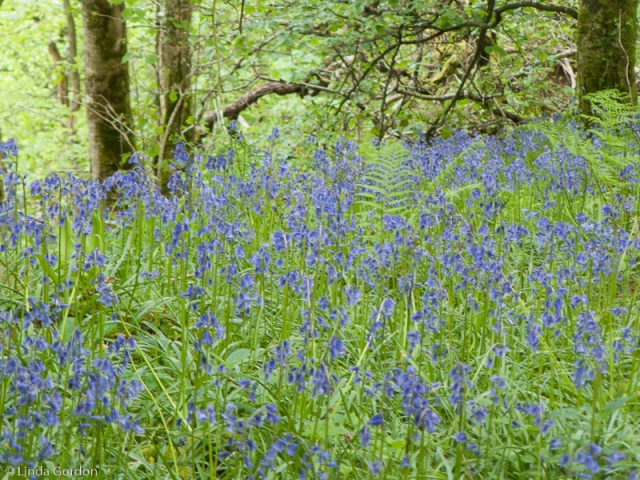 Tobias Jones works in Windsor Hill Wood, Somerset with disturbed young people, creating a supportive working community where they may regain trust in life. He tells us that one part of the healing effect of woods is that they can be sometimes be frightening as well as calming – able to trigger and bring one’s deepest fears up to the surface for release.

Today, the benefits of engaging more closely with woodland are becoming ever more widely-known, both here and in other countries. There is growing interest in healthy recreational and educational activities of all kinds (such as the Forest School movement), as well as quiet contemplative walking and artistic pursuits. In Japan, there is the well-established practice they call ‘Forest-Bathing’, which is basically, taking a leisurely wander under the trees, with no specific purpose in mind. It has been shown from extensive studies that this simple practice can significantly lower blood pressure and reduce stress.

I have, in fact, for a number of years taken congenial groups of art and nature lovers on similar walks, without realising there were such benefits, other than pleasure!

It is true what Adrian Cooper says in his introduction to Arboreal – imagination and proximity to trees and nature in general, are two of the most powerful tools we have for countering the effects of estrangement and restoring ourselves to a state of wellbeing.  We are after all, an integral part of this planet and its processes, and it may be that within the presence of trees our minds and nervous systems can most easily become realigned and find peace.

The other day, I went to Bucks Valley Woods, not far from where I live on the coast of North Devon.  The aim was to head for my favourite tree. It grows on a bank alongside a steep footpath, and is currently covered with a luxuriant coating of vivid green moss. Its roots are sturdy, prominent – exposed by years of people clambering up to get into another part of the woods.

Whenever I pass this tree, I pay my respects, and in times of crisis, I tell it all my troubles (silently!) It never answers of course, but invariably, I go away feeling a whole lot better. 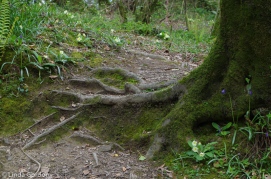 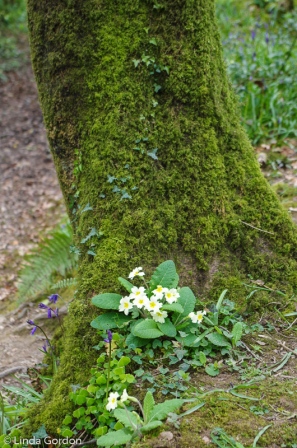 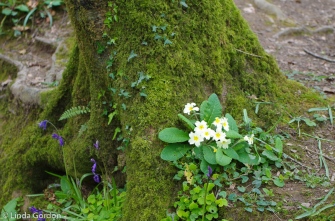 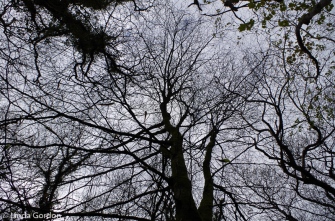 On this occasion, I entered the woods, and my heart sank as I saw a notice from the Council pinned up, saying that one of the paths through the woods has been closed because of forthcoming ‘developments’.  We all have to cope with change, because that is
the nature of life, but I knew this place would never be quite the same for me, once the noise of everyday human activity began.

These woods where I am greeted on arrival by quiet sounds of running water trickling over stone, small woodland birds singing high up, the breeze stirring in the canopy… solitude.

When I say ‘solitude’, it is not that I never meet people in the woods, but they are usually engaged in the same sort of quiet activity as myself. We become part of each other’s scenery. This is my particular version of Forest Bathing. I hope it may long continue for all of us.

‘Arboreal‘ was drawn together as a memorial to the late woodland ecologist and historian, Oliver Rackham. I very much enjoyed wandering through its many fascinating and diverse contributions, both essays and poems,  – and pausing from time to time to admire the visual images: including photographs by James Ravilious, Ellie Davies and Kathleen Basford, and art works by Peter Freeman, David Nash and Andy Goldsworthy.

I am primarily a visual artist, living on the North Devon coast, a beautiful semi-rural area in South West England. I am interested in full engagement with 'place' and the eternal movement of life - particularly as it relates to what we call 'the natural environment'.
View all posts by throughstones →
This entry was posted in Devon, environment, nature, North Devon, place, trees and woodland and tagged Adrian Cooper, Arboreal, Bucks Valley Woods, Forest Bathing, Forest School, Little Toller, Philip Hoare, photography, Richard Mabey, Robin Walter, Tobias Jones, Woodland Trust. Bookmark the permalink.